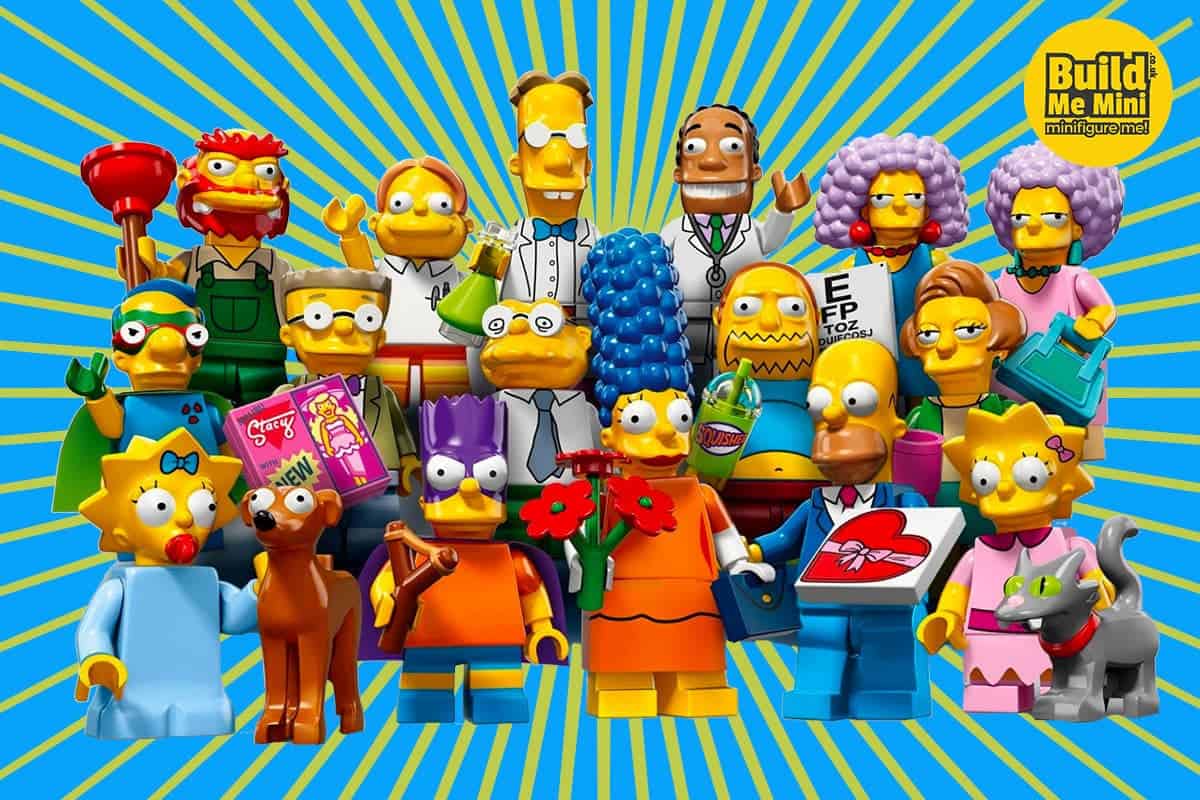 Today is a good day for Simpsons and LEGO fans alike. Not only the announcement of the new LEGO Simpsons Kwik-E-Mart set (Set 71016) but also the stock photo for the LEGO Simpsons Minifigures Series 2 collection! Here, we can clearly see some brilliant new additions to the LEGO Simpsons world. Not least some great accessories.

Admittedly, the final choices for the figures seem a little odd in some respects, but considering the vast, vast world of The Simpsons, it’s understandable that some of our first choices didn’t make the final cut. That said, I think there are some golden choices too. Batman is cool. Although perhaps a little unnecessary considering that we already have a couple of Bart’s (from Lego Simpsons Minifigures Series 1 AND the Simpsons House – not to mention the inclusion in the new LEGO Simpsons Kwik-E-Mart set!), but still – as a major character in the series – it makes sense. The main reason we like him is that we finally get a slingshot. Not just a picture of a slingshot on a 2×1 tile like from the LEGO Lone Ranger sets, but an actual slingshot. Cool.

Other highlights for us are definitely the new Squishee cup with the Comicbook Guy (who also looks awesome) as well as some other fantastic accessories in this set. Full list below. The stock photo photo doesn’t show all of the accessories that come with figures, but at least we know WHO we will be feeling the packs for, come May 2015.

After a long look at all the new colours, torsos and accessories in the newly-released stock photo from LEGO, here’s a breakdown of the characters and the accessories (that we can see) starting top left:

Yes, there are some obvious missing pieces to the LEGO Simpsons Minifigure world, like for example – if they are going for the superhero world – lets have Radioactive Man with an accessory of Spiderpig. Not to mention Lenny and Carl would have been a nice addition. I like the fact that we’re getting a LEGO Simpsons Snake minifigure, even if we have for fork-out for the Kwik-E-Mart set to get him. I thought it would have been good to have Moe and Barney – but then I considered where LEGO where taking this journey. And if I were them, I’d probably be making a LEGO Simpsons Moe’s Tavern next. I suspect that will be the 2016 release. It’ll probably have at least Homer, Moe, Barney and maybe also Lenny and Carl. Either way – in the meantime – we’re pretty excited to be getting our hands on these LEGO Simpsons Minfigures Series 2.

If you missed out on LEGO Simpsons Minifigures Series 1, including the classic Simpsons as well as LEGO Krusty, LEGO Itchy and LEGO Scratchy – you can still get some of them in our shop while stocks last. We’ve seen a mad-rush in the purchasing of the original season now that the second one has been announced! Exciting times!